Guess what? There are fiction readers out there with money they’re willing to spend on books.

Yeah, okay, that’s not terribly surprising. What’s surprising (to me) is how many of them can wind up wanting the same books.

I’ve been pointed to Brandon Sanderson’s current Kickstarter campaign, and I’m stunned, amazed, at the speed with which it was funded (an initial goal of $1 million was apparently met within minutes of launching the campaign), and the speed with which it continues to attract new backers. He doesn’t need my support, doesn’t need me to further share the link. I’m doing it because it’s awesome to just open the screen and watch the numbers scrolling (up, Up, UP!) for a few minutes. As I’m writing this, he’s got 69,882 backers pledging $17,767,653 for his four new novels and assorted other goodies. Just take a look, and then remember that his “overnight success” has been building for a couple of decades.

Meanwhile, down here among the mortals, I mentioned that I’ve got a story in the upcoming anthology The Fans Are Buried Tales, edited by Peter David. That campaign ended yesterday, garnering 283 backers pledging $8,564 of the initial $7,000 goal. So I’m thrilled that the book will be along sometime soon. Anyway, just being amazed that writers can find incredible success if they can build sufficient audiences.

No cutesy time-traveling trio teaser today, just an announcement that the Kickstarter campaign for Three Time Travelers Walk Into… has hit its funding goal! That means the book will exist (and the writers are warming up their writing hands right now). Very exciting! And thank you, all, for being a part of it.

The campaign runs another 45 hours, if you want to get involved, get your name in the book as an early backer/supporter, or if you want to push us to add even more stories (that’s the first stretch goal, at $7,000).

The editor, Michael A. Ventrella, will be announcing the writers’ guidelines in the next day or two, for those of you who want to get involved as a writer. For now, start thinking about which trio of time travelers you’d write about, in which situation.

And again, thank you! 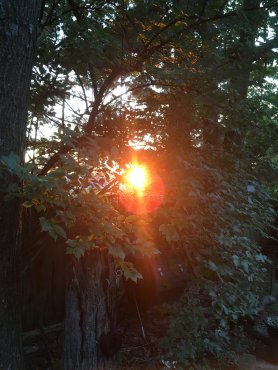 I know, I know: I seem to be a one-note song of late. But I promise, it’s almost over. At the moment, the Kickstarter campaign is a scant 70 hours away from concluding, and it’s $404 short of being funded and bringing into existence what promises to be an awesome anthology. Please, tell a friend about it; tell a writer about it (it’ll be a new market for them… if it’s funded). Once we hit that $6,000 goal (really, we’re so close), I won’t be asking you to help spread this word again.

Oh, and the time-traveling trio? Well, how about you and me and Bobby McGee, at the launch party for Three Time Travelers Walk Into…? It might seem a little self-serving, but it would totally be great! Hope you can check it out with us.

In totally unrelated news, I was at a small gathering of friends in New Jersey this weekend, and managed to catch the attached photo of the sun near sunset. It was gorgeous, and spending the day mostly outside with friends was pretty good, too!

Albert Einstein, Jack the Ripper, and Robin Williams at Queen Elizabeth II’s coronation: that’s gotta be one heck of a party! Want to write the story? Three Time Travelers Walk Into… is in the final stages of its Kickstarter campaign (only five days to go), and almost fully funded! Check it out: https://www.kickstarter.com/projects/667435382/three-time-travelers-walk-into

How would the Miracle on Ice 1980 US Olympic Hockey Team been different if it included Billie Jean King, Harriet Beecher Stowe, and Rosalind Franklin? If you think you’ve got an interesting idea, it might fit in Three Time Travelers Walk Into…, a nifty time travel anthology Fantastic Books will be publishing if the Kickstarter campaign is successful. And we’re into the home stretch: we’ve got six days left, and a scant $1,400 to go. Check it out! Tell your friends! https://www.kickstarter.com/projects/667435382/three-time-travelers-walk-into

And in other news, today is publication day for On Samuel R. Delany’s Dhalgren, a collection that Publishers Weekly called “immersive and comprehensive.” The book is the #1 New Release in Amazon’s 20th Century Literary Criticism category, and we’re thrilled.

Con-Tinual, the never-ending electronic science fiction convention, recently hosted a panel discussion with part of the crew behind the forthcoming anthology (and current Kickstarter project) Three Time Travelers Walk Into…. Listen in as we discuss time travel, where authors get our ideas, the difference between short and long fiction, and much more. Participants include panel host and author Gail Z. Martin, editor Michael A. Ventrella, authors David Gerrold, Jonathan Maberry, Jody Lynn Nye, and Leslye Penelope, and me. The video is on YouTube, the campaign is on Kickstarter.

Not sure why Amazon can’t do it, but Barnes and Noble understands that On Samuel R. Delany’s Dhalgren is available for pre-order (publication date is September 9). Publishers Weekly has already said that fans “will want to snap up” “this immersive and comprehensive collection.”

In other pre-ordering news, last night Michael Ventrella, I, and four other authors slated to be a part of Three Time Travelers Walk Into… participated in a Zoom interview which will be posting in the next day or three; it was a lot of fun. And speaking of TTTWI, the Kickstarter campaign continues, and it would be great if you told a friend about it. Thanks!

Grace Hopper, Sally Ride, and Amelia Earhart as the crew of Apollo 11. Next step: the stars! Think that’s a story you can write? Check out Three Time Travelers Walk Into… on Kickstarter. https://www.kickstarter.com/projects/667435382/three-time-travelers-walk-into

All the punch lines are ruined!

Check out Three Time Travelers Walk Into… on Kickstarter. https://www.kickstarter.com/projects/667435382/three-time-travelers-walk-into 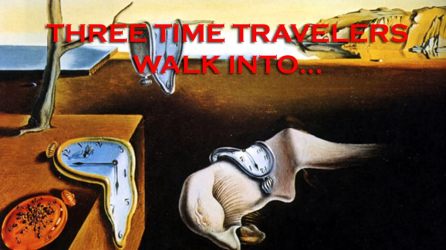 50.7% funded! And David Gerrold! As of today, Three Time Travelers Walk Into… is half-way to being funded and existing! And as of today, David Gerrold—creator of tribbles, Sleestaks, and the Martian Child—is a part of the project, planning to write a story. Twelve days down, eighteen to go; please tell your friends! And check it all out at https://www.kickstarter.com/projects/667435382/three-time-travelers-walk-into