I delivered my absentee ballot today to a nearby early voting location. As I’ve said several times, my vote probably doesn’t matter, because of where I live. Yours may be far more important.

Something odd about this ballot, for me: this is the first time that I’ve voted a straight party ticket. I voted for the candidate representing the Democratic Party in every single race. And this ballot is my response to the actions (and inactions) of President Donald Trump, and to the leaders of the Republican Party who have rolled over and allowed the president’s nonsense and villainy to run rampant and unchecked through the government and the country. (Yes, villainy: he frequently seems to think he’s still playing the villain on a reality television show, rather than realizing that he is the President of the United States, and that his words and actions have very great impact on the planet.)

I regret that my votes are against candidates, rather than for candidates (and this is also notice to the Democratic Party not to take my action in this election as an indicator of my future votes), but I’ve decided that a continuing Trump Presidency is a danger to the continued health and well-being not only of the country, but of each one of us individually. Joe Biden is not my ideal choice for President, but he is a much better choice in this election, and my vote for him and the rest of the Democratic ticket is my attempt to emphasize how much I think Donald Trump is the wrong choice in this election. 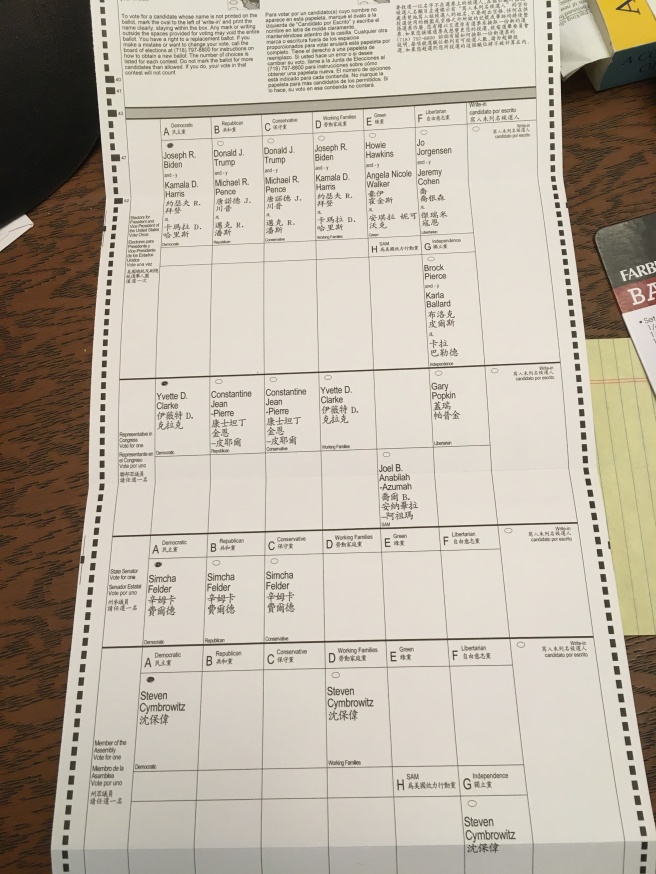