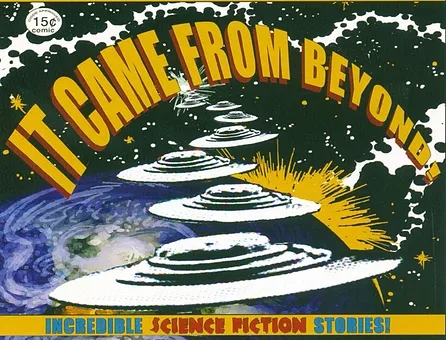 My friend Rachel had an extra ticket, so tonight we saw It Came From Beyond, a science fiction musical.

As a New Yorker, I may be a bit jaded about seeing Broadway productions. It’s not an every-month experience, but not a once-in-a-lifetime experience either. So at first I was a bit put-off by the experience of seeing this off-Broadway show. But once I got into it, I realized it was a charming story with a great script and some very good performances (I particularly liked the range of emotion Vera the computer showed with only the word “beep”).

Writer and producer Cornell Christianson (who produced The Paper Chase) just happened to be at tonight’s performance, and gave a brief introduction. He was also available to chat after the show, but that’s not what you care about.

It Came From Beyond opens in a 1950s middle American high school. Nerdy little Harold is reading the comic book It Came From Beyond, looking for the key to his science project. Jock Steve is just who you’d expect, and pretty Becky is the girl of everyone’s dreams. Becky’s father, Mr. Fielding, is the teacher who catches Harold and Steve at the end of their tiff, and gives them both detention, as well as forcing them to work together on their science project. And then there’s Miss Benson, the cooking teacher who only has eyes for Mr. Fielding, the widower.

As Christianson said in his introduction, his specialty is that he writes musicals “with a unique structure of two parallel and interconnecting stories that go back and forth between two worlds.” In tonight’s show, the characters very adroitly change their appearance or outfit when the story shifts between 1950s high school and the world of It Came From Beyond (glasses on or off, tie on or off, and so on). In that world, Harold is the Professor, whose scientific experiment will save the world from the aliens; Steve is the rocket salesman our jock would probably have grown into; Mr. Fielding is the Colonel, who only wants to bomb the commies first; and Miss Benson is Private Jayne, who only has eyes for the Colonel. Oh, and Becky is… Becky (“she even has my name!”). Backed up by six dancing/singing soldiers, our heroes must save the Earth… once they realize we really are under attack.

Other than a few of the songs running a bit too long, the story was fun and gripping. It’s obvious the author is a long-time science fiction fan from way back (catching the sly little references to the classics and near-classics is a fun little extra to the performance). So I can definitely recommend It Came From Beyond for a fun night Off-Broadway (currently at St. Luke’s Theatre).

Note: I wrote this review before looking at the web site (www.itcamefrombeyond.com). Then I looked at the site, and realized that the earlier performances apparently had much more serious productions, with full sets (the staging at St. Luke’s was minimal to non-existent: three desks, three boxes for sitting, and a handful of props). But as I said above, the story is the reason to go to the show; the staging is only a minor concern.