On Saturday (November 7), I made mention of a pundit’s misstatement about one of the “firsts” that Kamala Harris will bring to the vice presidency. One of my friends on Facebook recommended writing an op-ed for the New York Times.

I’ve all but given up submitting pieces to newspapers because, if they’re timely, I have to figure out which paper is likely to say yes on the first attempt, because I won’t get a chance to submit it elsewhere, or by the time I don’t submit it, it will be incredibly dated. And if they’re not time sensitive (personal failing here), I tend to lose interest in submitting them after two or three newspapers fail to respond (and no newspapers respond negatively; they all say “if you don’t hear from us in [some amount of time], that means we don’t want it”). So I’ve taken to publishing my essays on my own blog, and hoping to eventually see some remuneration from sympathetic readers (it hasn’t happened yet, but I’m eternally hopeful).

At any rate, I wrote this piece Sunday, November 8, and submitted it to the Times with this cover note:

My first appearance in the Times was a letter to the editor commenting on the coverage of the 1984 election. I knew it appeared only after reading the letter in the paper, realizing it agreed with my views, and then seeing that the byline was, indeed, my name. After that, I earned my degree in political science from Boston University, went on to a career as a writer and editor, and am the author of three books on presidential history and trivia.

On Tuesday, they published a similar article by a staffer, making me grumble good-naturedly: obviously, the piece I wrote was a good idea, it was something they were interested in publishing, it’s just that my timing was off (though admittedly, I wrote it the same day everyone was thinking the same thing). So I’m publishing it here for your delectation.

Not all the “first”s are Kamala Harris’s

Charles Curtis was vice president from 1929 to 1933. Prior to that, he served more than three terms in the Senate (resigning in the middle of his fourth to become vice president), and before that, seven terms in the House of Representatives, representing Kansas. During his time in the Senate, he served as president pro tempore and as majority leader, and he co-authored an early attempt at the Equal Rights Amendment.

Prior to his political career, Curtis was a lawyer in Kansas, and prosecuting attorney of Shawnee County, Kansas, from 1885 to 1889. And after retiring from the vice presidency (he and President Herbert Hoover were landslided out of office in the election of 1932), Curtis resumed his law practice in Washington, DC.

Curtis is the last vice president to have been born in a territory: he was born in Topeka, Kansas Territory, on January 25, 1860. Kansas became the 34th state a year later.

Curtis was a member of the Kaw Nation. His mother, Ellen Papin, was Kaw, Osage, Potawatomi, and French. His father, Orren Curtis, was English, Scots, and Welsh. Through his mother, Curtis was a descendant of chief White Plume of the Kaw Nation and chief Pawhuska of the Osage. His mother died when he was 3, and his father fought in the Civil War. Curtis was raised by his grandparents: his maternal grandparents on the reservation, and his paternal grandparents in Topeka.

Curtis and his wife, Annie Elizabeth Baird, had three children. She died in 1924. Curtis is the last vice president to have been unmarried during his entire time in office. His sister, Dolly, acted as his official hostess for social events. When he took office as vice president, Curtis was 69 years old: the oldest person to become vice president (though that record was exceeded by 71-year-old Alben Barkley in 1949).

Vice presidents at the time did not enjoy the partnership with their presidents that has marked the last several administrations, and the formerly active senator bristled at the inactivity of the office. So, trying to make the best of it, he enjoyed the status of the vice presidency, and made a big deal out of his rise “from Kaw tepee to Capitol.” He decorated his office with Native American artifacts and posed for pictures wearing Indian headdresses. 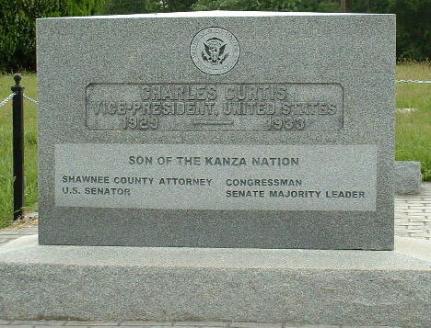 By the way, Harris is also not going to be the first vice president to have had a long-term relationship with a man. But the story of Vice President King will have to wait for another time.